The Limbe Thermal Power Plant was commissioned in 2004 with an installed capacity of 85MW i.e. 17MW for each of the five (05) Wartsila 18V46 Gensets.

What prompted the plant refurbishment work, what was the problem?
The Limbe Thermal Power plant was commissioned in 2004 with an installed capacity of 85MW, which is equivalent to 17MW for each of the five (05) Wartsila 18V46 gensets. Then, the firm power was 82MW. As from 2012, we noticed a gradual decrease of this firm power, which dwindled to the minimum value of 38MW in 2014, with only four (04) gensets available. This firm power drop resulted from several causes, notably poor cooling due to the serious corrosion inside and outside the radiators and pipes, delay in maintenance (major 24000 hours servicing not done on 04 units which had already been running for an average of 33300 hours, the 36000 hours not performed), the poor quality of cooling water without a water treatment plant. These factors caused serious problems on the equipment, damaging quite a significant number of them. The resultant power drop was significant, about 04 MW per genset. It thus necessitated considerable resources, heavy investment, to increase once more the power plant’s capacity to 85MW, and hence the need to refurbish the power plant. .

In 2015 a new team was appointed to man the Plant, and the team ensured the cleaning of radiators of the gensets and service some mechanical components. Some cylinder heads and turbochargers of Genset 011 were repaired by subcontractors. The available power went up a bit to 52 MW. Thus there was 51 MW available to be fed into the SIG prior to the refurbishment project, with the four (04) Gensets available.

What role did the employees play?
It was our duty to step up the output of Genset 011 from 12MW to 16 - 17MW like all the other gensets, and that was what we did. We had to supervise the project such that we could check the quantity and quality of the spare parts supplied, ensure the work is done according to best practice, use our technical expertise to overcome technical difficulties in the project, precisely note what was done during projects relating to future maintenance and generation, all this without any accident. There were equally colleagues of other Plants /Units that came in to lend us a hand, notably from the Oyomabang and Logbaba plants as well as from the SDMC Centre South Maintenance sub-division (Mefou)..

What has changed following refurbishment?
The Plant’s capacity has returned to 85MW, which is 17 MW per genset, thanks to the advanced technological systems used. However, we are operating at 80MW as recommended for continuous running with heavy fuel. Oil and fuel separators were changed. Radiators were replaced with insertion of a semi-automatic washing system in order to prevent sea salt deposit, which was not there before. A cooling water treatment plant, which was inexistent before, was installed. A more advanced supervisory system was installed. A more advanced voltage regulator system was installed on every genset. The personnel (The technical supervisors and technicians) took over the running of the plant with much experience and skills.

What do you do to get it …clean?
Four things:
- Periodic inspection and sealing to reduce leakage (water, oil, fuel) ;
- Composition of an operation maintenance team for monitoring facilities and ensuring they stay clean;
- Under the supervision of the GD, we have a 5S policy and carry out housekeeping every Friday morning for two (02) hours;
- Ensure everyone is trained and diligent in order to ensure that clean places remain clean (workshop, worksite, …).. 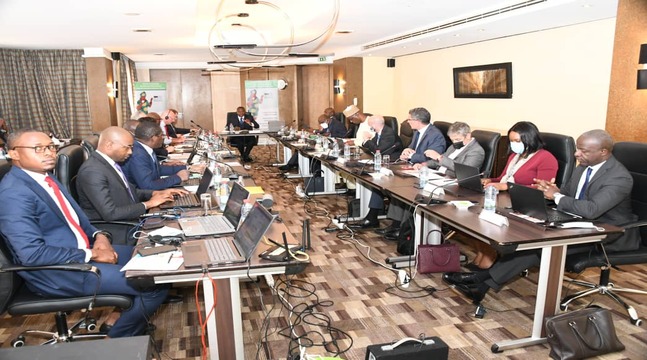